What is Living documentation

Living Documentation comes from the world of Behaviour Driven Development, and is closely related to the idea of Executable Specifications. But what do we mean by "living documentation"?

You can see a simple living documentation report, produced by Serenity BDD, in the illustration below: 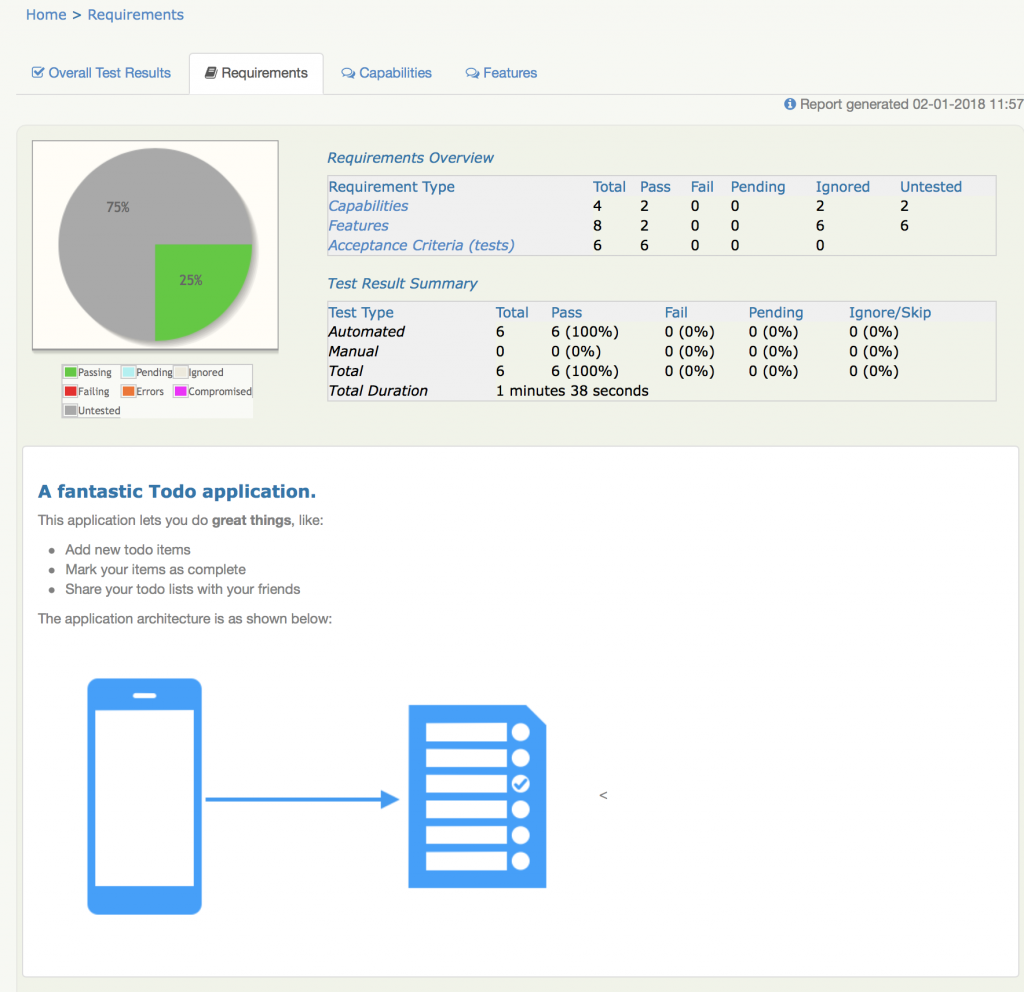 Living Documentation is not Test Reporting

Living Documentation should not be confused with conventional test reporting. There are a number of important differences between the two. And understanding these differences makes it easier to write good quality living documentation.

Conventional test reports happen late in the development process. Testers start working on test cases as soon as the user stories are finalised. But work on the test reports themselves comes much later, once the features are delivered.

Test Reports are the responsibility of QA. It is the testers who design the report structure and generate the test reports.

Living Documentation is written collaboratively by many different actors. BAs, developers, testers and product owners all play a role in the BDD process. They all help to express the business needs in a way that can turned into automated acceptance tests.

Testers are also the primary consumers of test reports. In many projects, other team members will only ever see test report summaries or overviews.

Living Documentation is for the whole team. Pending scenarios describes what a feature should do before it is implemented. And Passing scenarios show that a delivered feature behaves as expected. In addition, they document what the feature does, and how it works. This is why we write them in business terms, in a way that is easy to understand for non-testers.

Produced by testers and for testers, a test report naturally has a very strong testing focus. The emphasis is primarily on knowing whether a test passes or fails, and, at a higher level, knowing what proportion of tests pass or fail.

Living Documentation is more like a very detailed illustrated user manual. The focus is about describing what the application does, in business terms.

Suppose you are implementing a user registration feature. A test report might check whether the right countries appear in a country drop-down list. A living documentation scenario would be more interested in describing the user registration process as a whole. It might show how this process works for different types of users. It might also illustrate the business constraints that limit the choice of countries.

These differences can be summed up in the following table:

Living Documentation and other types of tests

Of course there are some exceptions to this rule. For example in regulated environments, living documentation will often be more exhaustive and detailed. And if you are working with a legacy application with little unit testing, you may need more comprehensive high level tests.

As development practices evolve, we need to evolve our thinking about test reporting. Traditional test reports, and traditional test reporting tools, are a legacy of Waterfall. They force us to think in terms of tests that happen only post-implementation. Unlike living documentation, they do not encourage collaboration and communication within the team. Instead they enourage silos They do not inject quality into the beginning of the development process. And they do little to streamline throughput.