Many Serenity users that I work with and talk to have projects with a very large number of tests, spread over many functional areas and many different teams. It is useful to have an overall view of all of the test results, but it is also useful to limit the test results to show only the tests that are relevant to a particular team, or at a particular point in time. For example, an individual Scrum team may want to have a report that includes just the tests related to the features they are working on, or even just those for the current sprint.

Serenity lets us do this in a number of ways:

Filtering tests during test execution is easy: you simply use the tags option. Suppose you mark each test suite with a tag to indicate what scrum team is working on them.

So to run only the tests for the Cheetahs scrum, you could run the following:

You will also need to configure the serenity-maven-plugin to use the tags you provide at the command line:

When you run the tests with this configuration, you will get a test report with only the tests related to the Cheetahs scrum team. However, it will still produce a requirements report that contains all of the requirements for the whole project. 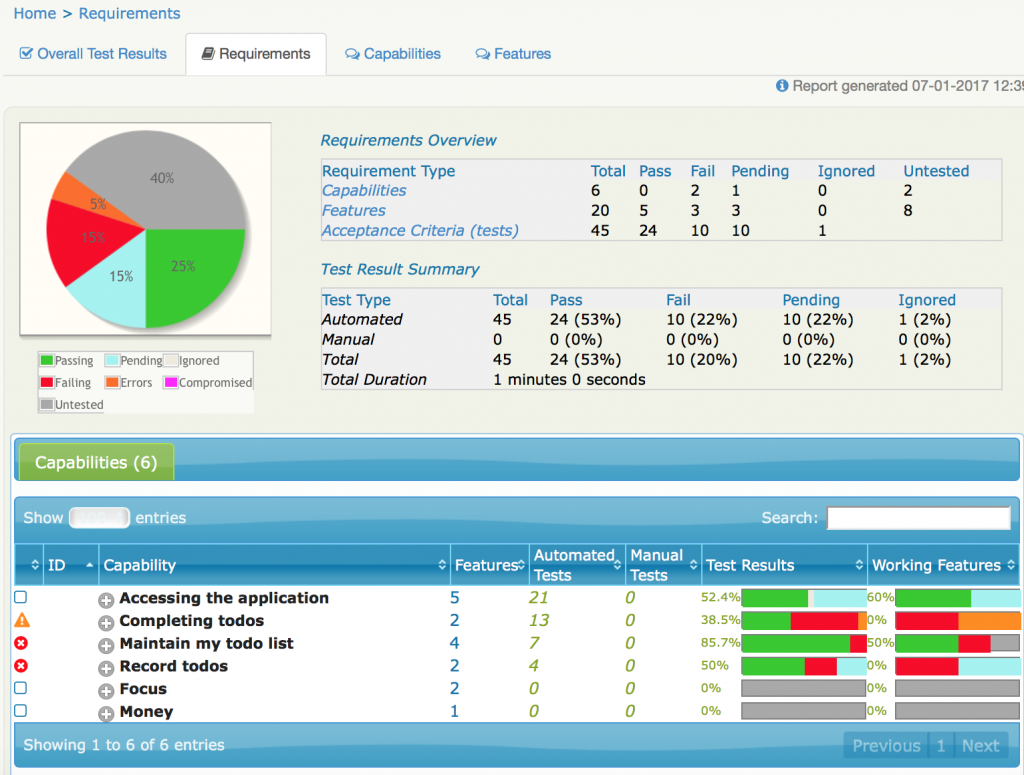 We can narrow this down further by using the serenity.exclude.unrelated.requirements.of.type property. You can pass this property in on the command line or place in the serenity.conf file in src/main/resources, or in the serenity.properties file in the project home directory.

We could make this report more focused by telling Serenity to exclude any capabilities that do not contain tests that are associated with the Cheetahs scrum, by setting the serenity.exclude.unrelated.requirements.of.type property to capabilities:

We could then generate a report that documents only the tests and requirements associated with the Cheetahs scrum team like this:

If the full test suite has already been run, we could use the generated test results and produce a focused report by running the mvn verify phase while skipping the tests:

This would produce a report that contains only the tests and requirements related to the Cheetahs scrum team: 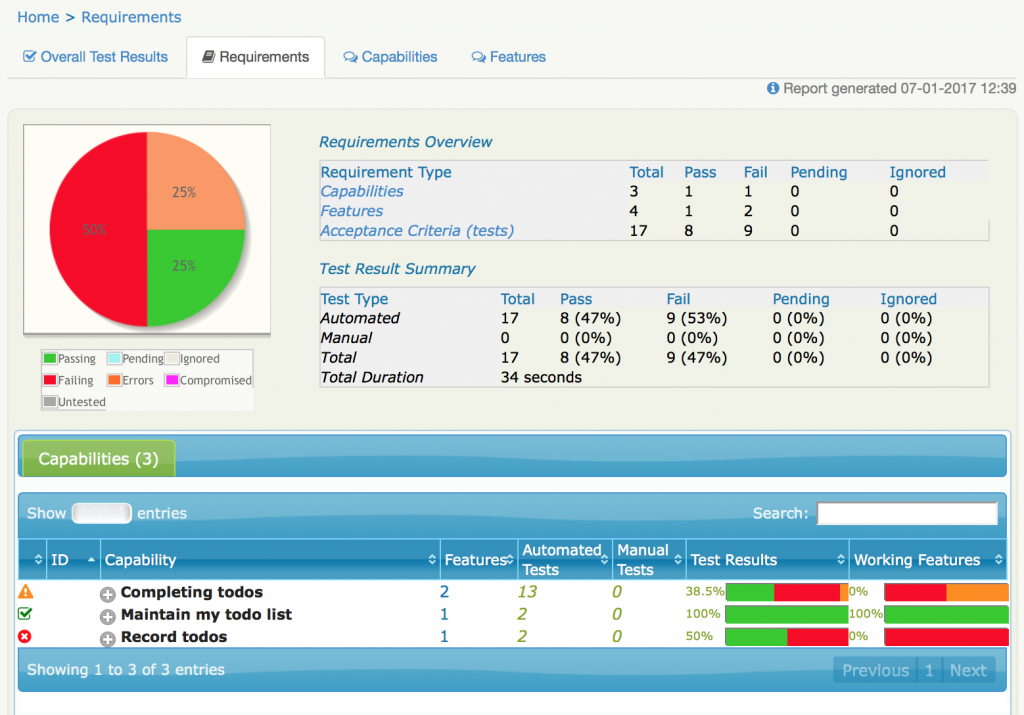 In this example, the "Completing todos" capability is made up of two features: 'Complete a todo' and 'Toggle all todos'. Now suppose that not all of the functionalities in the 'Toggle all todos' feature were to be implemented by the Cheetahs scrum. In this case, the Capability report below is misleading, as it contains tasks that is not part of the Cheetah team's backlog: 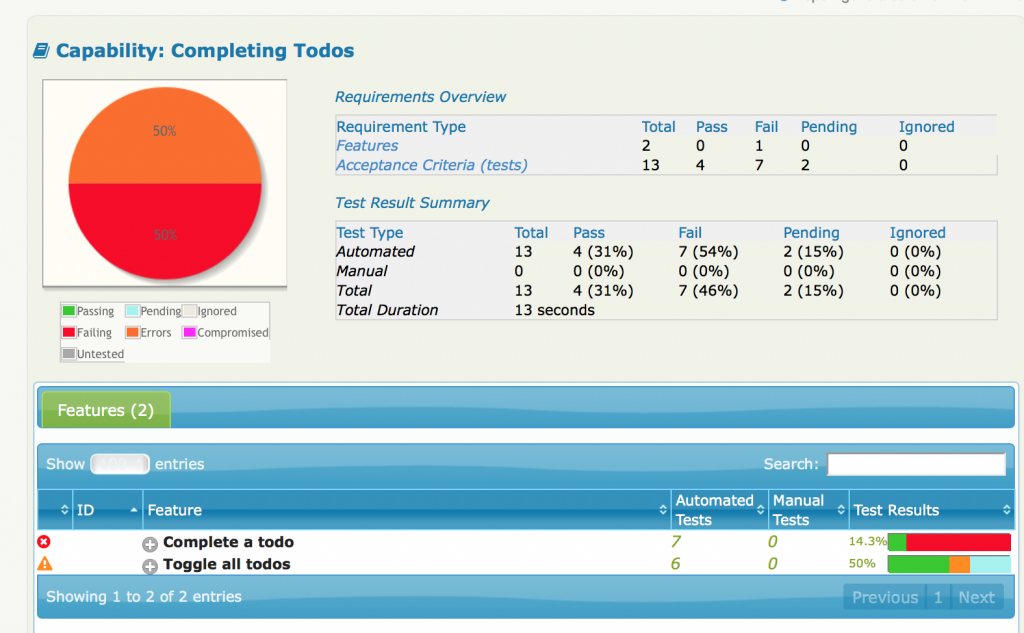 We can fine-tune the requirements reporting further, by telling Serenity to filter not only unrelated capabilities, but also unrelated features:

Features in the generated report would now only refer to acceptance criteria assigned to the Cheetah's scrum: 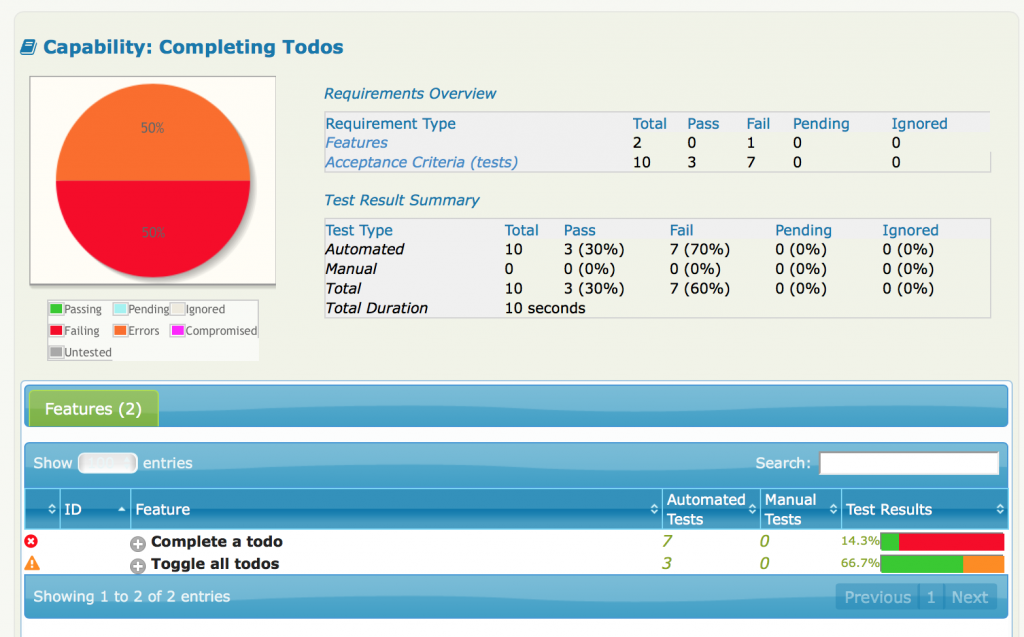 The examples here use the default capabilites and features requirements hierarchy. If you have customised the requirements names, you would simply use the customised names instead of the ones shown here.